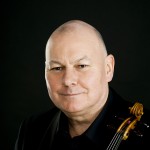 A native of Torquay, Devon, Alan Smale began to pay the violin at the age of ten. His first teacher was Harold Petts, who had been a student of the great English violinist Albert Sammons. At the age of sixteen in 1970 Alan moved to Leeds to study at the College of Music for two years until 1972 when he was accepted on to the Performers’ Course at the Royal Academy of Music in London. Here his teachers were Clarence Myerscough for violin and Sidney Griller for chamber music.

With the RTE NSO, Alan has performed and broadcast over twenty concertos, including most recently the Double Concerto by Delius, (2012) Haydn’s Sinfonia Concertante (2009) and the world premiere of the Violin Concerto by Jerome De Bromhead (2011), a work dedicated to him. In November 2012 He will give the world premiere of the concerto by Frank Corcoran, in the main concert season of the RTE NSO, and he will perform the Hindemith Concerto as part of the 2013-14 season. His commercial recordings with the orchestra include the Concertos by Raymond Deane and James Wilson, the latter dedicated to him, and the orchestral solos from the Richard Strauss Tone Poems ‘ Ein Heldenleben’ and ‘Don Quixote’.

Alan is also leader of the Irish Film Orchestra, and has a long list of film credits to his name, stretching back some 18 years He was Concert Master on the original ‘Riverdance’ album, as well as ‘Lord of the Dance’ and other popular international successes. More recently he led the string section on several albums for ‘Celtic Woman’, and led and co-ordinated an orchestra for the ‘Celtic Thunder’ recording project in 2011.

Alan is founder and director of the Degani Ensemble, a group formed in the 1980’s to perform a variety of chamber music for wind and strings. The ensemble has recorded and performed virtually all the repertoire for oboe and strings, as well as many works for larger chamber group. Currently they are on the list of rostered artists for the Music Network, and undertake frequent concerts at arts centres and festivals throughout Ireland. A former member of ‘Concorde’, Alan has premiered countless works by Irish composers, and continues to work closely with composers as a tireless advocate of contemporary music.

Alan has experience of auditioning and adjudicating dating back to 1977, having been present at almost all the orchestral auditions for the RTE NSO during his tenure. He is a frequent external examiner for both the Royal Irish Academy of Music in Dublin and the Cork School of Music.

He has given frequent lecture recitals to students on subjects relating to audition technique and practice, orchestral technique and discipline, and other related matters. An expert in contemporary string writing and technique, he has worked extensively with many composers, both established and at student level, advising and demonstrating the possibilities of the violin in contemporary music. He was guest lecture / recitalist at three of the early Composition Summer Schools run by John Buckley and the late James Wilson in the 1980’s, and has had many works written for and / or dedicated to him.

Alan helped to inaugurate the current orchestral mentoring programme run by the RTE Performing groups in conjunction with many of the third level music institutions in Ireland. He is acutely aware of the standards required for orchestral work, particularly the high level of audition technique, and he enjoys advising and coaching student players on every aspect of professional life.

A member of the string faculty at the Royal Irish Academy of music from 2004 – 2009, Alan continues to teach privately and to give consultation lessons and master classes when his busy performing schedule allows. He has undertaken, with other RTE NSO members, many outreach programmes in schools, colleges and in prisons around Ireland, presenting and engaging with the audience in a wide range of music.

A gifted and entertaining public speaker, Alan is frequently called upon to address audiences and work gatherings on behalf of the RTE NSO, and he is also well accustomed to presenting and giving spoken introductions to the players and repertoire at concert performances. He has a Masters degree with first class honours in performance from the Cork School of Music, gained in 2002, and an L.R.A.M. in violin teaching gained in his full time student years.

Alan plays on a superb Venetian violin, made by Eugenio Degani in 1896.