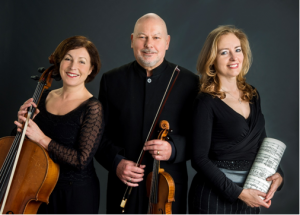 The Degani Piano Trio is an established Irish Piano Trio of distinguished and award winning musicians Alan Smale on violin, Rachel Quinn on piano and Annette Cleary on cello. They have recorded albums in recent years of repertoire including Haydn, Dvorak, Chopin, Brahms and Piazzolla. They are renowned for their insightful and joyful interpretations of the classic trio repertoire. The trio was formed in 2015, and has performed regularly at at the National Concert Hall in Dublin, the Curtis Auditorium CIT, Con Brio Festival, Calary Festival, Crescent Contemporary Music Festival, Whale Theatre and at other venues around Ireland. Most recently to celebrate the 250th Anniversary of Beethoven’s birth the Degani Piano Trio completed a ‘Words and Music’ series of Beethoven’s Piano Trios with narration of excerpts from Beethoven’s letters in the NCH’s Chamber Music Series 2020 collaborating with the acclaimed Irish actor Barry McGovern.

Lyric FM recently broadcast a complete ‘Lyric Concert Programme’ from these concerts. It has gone on to be included in the European Broadcast Union’s database of programmes available to 56 member countries. Upcoming projects and CDs include premiere performances of Piano Trio works by John Buckley, Michael Holohan and other Irish contemporary composers especially written for the Degani Piano Trio.

They have performed concerts of Beethoven’s Irish and Scottish songs with sopranos Cara O’Sullivan and Sylvia O’Brien and have joined with other well known musicians such as Paul Roe, Fingan Collins, Ruby Ashley and Cormac Breatnach in programmes of Irish Contemporary Music, Baroque and Film Music. They have also given masterclasses in violin, cello and piano to third level students of the ‘School of Music’ at Cork Institute of Technology’. Recordings include CDs of Haydn’s Gipsy Trio, Dvorak’s Dumky Trio, Brahms Trio No.1 and the Chopin Piano Trio in G minor. Other new releases include a much anticipated album of Piazzolla’s Piano Trio works including the Four Seasons of Buenos Aires Trio along with Revolutionario, Muerte del Angel and Oblivion.

Quinn was a calm presence at the keyboard making light work of the showy episodes while Cleary was a dynamo of generous expression and sprightly articulation. A concert of chamber music at its most accessible and entertaining’
Andrew Johnson , The Irish Times

Their choice of programme was perfectly in tune with the summer evening and its delivery was a delight from beginning to end…Each performance was so convincing that the audience reaction was one of absolute delight.
Declan Townsend, The Irish Examiner

The most complete and profoundly joyful music making. This performance had a blend of folksiness and high art sophistication that felt just right.
Martin Adams, Irish Times

Annette Cleary demonstrated an extraordinary level of ese in her cello playing, unyielding tone and warm vibrato. Rachel Quinn played beautifully in the Rachmaninoff Sonata and showed considerable stamina in a notoriously virtuoso piano part. A programme of Romantic music performed to an impeccably high standard and with charisma.
Matt Rafter, Golden Plec